The U.S. Mint  has temporarily sold out of its American Eagle silver bullion coins following “tremendous” demand in the past several weeks. In a statement sent to its biggest U.S. coin wholesalers, the U.S. Mint says it will continue to produce 2014-dated coins. The United States Mint expects to have over one million 2014 American Silver Eagle bullion coins for sale by Nov. 17, according to a memo the agency sent to its authorized distributo 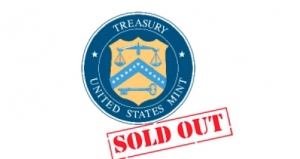 rs. Since the U.S. Mint cannot produce enough Silver Eagles, the Mint sold out of them after weeks of explosive demand, sales of the 99.9% pure silver coins will resume on a rationed basis.

In June, the U.S. Mint lifted its ration on Silver Eagle coins, which had been in place since January 2013 as unprecedented demand depleted silver coin blanks. At some point, the Mint will no longer strike coins for this year. As a point of reference, the Mint sold its last batch of 2013-dated Silver Eagles on Dec. 9. Buyers then had to wait for five weeks until this year’s version launched on Jan. 13, and quantities were limited until May. 2015 American Silver Eagles are due out in early January.

The United States Mint does not sell bullion American Silver Eagles directly to the public. Instead, they are offered in bulk to “Authorized Purchasers” who buy them at melt value plus a premium of $2 per coin. Bullion coins are usually available to buy for a few percentage points above the spot value of their precious metal content.

For information about where to store your coins, please call Colorado Vault & Safe Deposit Box Co. at 720.879.7134.