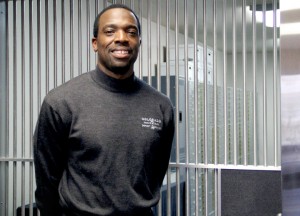 Colorado Vault owner Frank Robinson stands in front of the vault at Colorado Vault and Safe Deposit Box Co., which sits on the border of Centennial and Highlands Ranch. Photo by Ryan Boldrey.

From locking down opposing receivers for the Broncos in the early ’90s to locking up people’s valuables in the present day, Frank Robinson has found a way to keep metro-area residents feeling safe and secure.

Robinson’s business, Colorado Vault & Safe Deposit Box Co., which he owns along with Stewart Gallagher of Highlands Ranch, has provided a niche for the community as wait lists for safe deposit boxes at banks continue to grow.
The business, which opened in December 2009, is one of a kind in Colorado and one of just four non-bank safe-deposit box companies nationwide.

With a community-comes-first mindset, Robinson and Gallagher are currently mirroring their efforts of 2010, when they helped out a dozen or so families that had been displaced by the Fourmile Canyon Fire. Over the past two weeks they have been busy going out of their way to lend a free hand up to those who lost their homes or were forced to evacuate due to the Lower North Fork Fire.

“We set up our fire victims just like we would anyone else, depending on what they have and how much time they need,” said Robinson, who lives in Centennial. “We’ll issue them a box anywhere from 30 days up until six months. It takes a while for them to get organized and get their affairs in order, so we really don’t put any type of pressure on them in terms of time.”

Robinson said they became inspired to help victims of the fire in 2010 after seeing a news report about a woman who lost her home in the fire and then had all of her valuables stolen from her car while she was sleeping in an adjacent hotel.

“It doesn’t get much worse than that,” he said. “You’ve already lost your house and are sleeping in a hotel, and then someone comes and robs you. We had the space so we figured we would do our part.”

And that’s what the business continues to do. Still in what Robinson calls their “growth phase” the vault is only about a third full, leaving ample space to help out when tragedy strikes.

“The most important thing we promote is keeping your documents safe that are hard to replace – wills, birth certificates, Social Security cards, vehicle titles, the warranty deed to the house, etc.,” Robinson said.