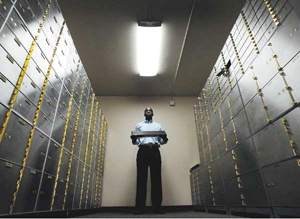 Frank Robinson is one of the owners and co-founders of the vault company in Centennial. (Craig F. Walker, The Denver Post)

A storefront in Centennial’s Foxridge Shopping Center might not come to mind as the first place to find a state-of- the-art vault. But Colorado Vault & Safe Deposit Co. is banking that enough consumers will think outside the box when it comes to storing their valuables.

The company markets itself as the first provider in Colorado of safe-deposit boxes that isn’t a bank.

“This is all we do,” said co- founder Frank Robinson. “We aren’t processing checks or taking deposits. This is our only business.”

Robinson, Stewart Gallagher and Kipp Bockhop came up with the idea while working at Wells Fargo’s Highlands Ranch branch.

The locking mechanism of the International Vault at Colorado Vault & Safe Deposit Co. (Craig F. Walker, The Denver Post)branches include the expensive and space- consuming vaults.

“We have safe boxes available at many, though not all, of our stores. In some locations in the south metro area, we do have a waiting list for large boxes,” said Wells Fargo spokeswoman Cristie Drumm.

People have long stored valuable documents such as birth certificates, passports and deeds of trust in the boxes.

But more modern uses include storing valuable digital backups and business records. High gold prices have made the boxes increasingly popular for storage of gold.

Now, the toughest challenge Colorado Vault faces is convincing people that an independent vault is as safe as a bank.

But several safeguards make the 1-foot-thick vault door difficult to penetrate. Drilling through a wall into the safe would take eight to 10 hours — not an easy task, with motion sensors, 24-hour video surveillance and close proximity to a 24-hour King Soopers and a busy intersection.

“We would gladly compare our policy and procedures with any bank out there,” Gallagher said. And Colorado Vault offers extras that banks don’t, such as 2 4/7 access for an additional fee.

And to those worried about institutional longevity, Gallagher points out the safe-deposit boxes lining one side of the vault. They come from New Frontier, a Greeley bank that failed in April 2009.

Colorado Vault estimates it has room for 2,000 to 3,000 boxes, depending on what sizes customers rent. Plans are to build a second store once the first fills up.

The rules on what can be stored are simple: nothing illegal, nothing explosive and nothing perishable.