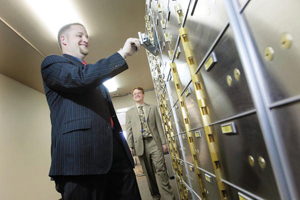 Two former bank employees say there’s a shortage of safe deposit boxes in many parts of metro Denver, and they aim to fill the gap.

Kipp Bockhop and Stewart Gallagher opened Colorado Vault & Safe Deposit Box Co. in a Centennial shopping mall in mid-January. With a 300-square-foot steel-and-concrete vault and 300 boxes – about half of them acquired from failed New Frontier Bank in Greeley – they’re ready to accept valuables.

It’s the first non-bank safe deposit box company in Colorado, and one of only a few nationwide.

The pair got the idea a couple of years ago while working at a Wells Fargo branch in Highlands Ranch. Because of branch consolidation and a slowdown in new construction, demand for boxes began to outstrip supply, they said.

“People were coming in in droves asking for boxes,” Gallagher said.

He and Bockhop began to consider opening a private safe-deposit box company, similar to those already operating in Las Vegas; Los Altos, Calif.; and Amarillo, Texas.

But state banking regulators weren’t sure how to handle a non-bank entity like the one Gallagher and Bockhop were proposing. Eventually, a change in state law inserted into a 2009 bill stripped the Colorado state banking commission of any oversight over non-bank safe boxes, leaving Bockhop and Gallagher free to open their business.

“We would have jurisdiction over a bank, but over any other entity, no,” said Fred Joseph, Colorado’s acting bank commissioner.

Gallagher and Bockhop are aware that being pioneers in an unregulated industry carries some risk. They plan to pay for their own yearly audit. They’re both bonded and plan to bond any future employees. Two employees are required to open the vault – Bockhop and Gallagher each know only half of the security code, so neither can open the vault alone, they said. Security cameras surveil the property continuously.

“At some point, this industry does need to be regulated,” Gallagher said. But for now, they’re too busy getting their business off the ground to initiate that effort, they said.

Although their prices are higher than those at most banks, Bockhop and Gallagher say their service is better. For example, clients can access their boxes 24 hours per day, seven days a week.

“If you need something at 3 a.m. or on a weekend, what good is it to have it locked up in a bank?” Gallagher said.

Pre-opening reservations were strong, they said. About 20 boxes were rented out within the first two weeks of opening, and they had appointments scheduled with about 40 more prospective clients.

They spent about $100,000 to build the vault and buy the initial 300 boxes; they will add more boxes once the existing ones are close to being filled.

Most of their early clients have had trouble finding available bank boxes in south metro Denver, they say. “Pretty much every bank within a five-mile radius is sold out,” Bockhop said.

But he added that availability varies in different neighborhoods. (Cristie Drumm, a spokeswoman for Wells Fargo & Co., the biggest bank in Colorado, said that the bank has “a good supply of boxes available around the state.”)

Some other potential clients are nervous about the safety of banks in general, given the rising number of institutions shut down by regulators in the past year.

“Some people are spooked by banks,” Gallagher said.

Colorado Vault is also willing to custom-build boxes to suit customers’ needs, say for an extra-large storage unit. But they do have a few rules: no explosives, no drugs and no perishable items. They’ve seen what happens when a customer leaves a banana in a box.

“You wouldn’t believe what some people will put in a safe deposit box,” Bockhop said.

Correction:Rental rates were incorrect in an earlier version of this article.