Guns and the 2nd Amendment

Dianne Feinstein introduced her Assault Weapons Ban fresh on the heels of Obama laying out his 23 executive orders to curb gun violence, and now gun control advocates are in full force laying out their arguments to restrict our Second Amendment rights. Gun control has many myths and truths so before we get started let us take a look at the 2nd Amendment.

The 2nd Amendment was ratified on December 17, 1791 along with the other nine amendments that make up the Bill of Rights. While it is a very short amendment, its exact meaning in terms of what types of weapons are protected is still in contention today.

“A well regulated militia, being necessary to the security of a free state, the right of the people to keep and bear arms, shall not be infringed.”

1. Myth: The Second Amendment does not guarantee the individual right to bear arms and only applies to a well-regulated militia.

In District of Columbia v. Heller, the Supreme Court affirmed that the Second Amendment does apply to the individual’s right to bear arms independent of any involvement in a militia. Many gun control advocates however point towards the phrase that the right does not extend to“dangerous and unusual weapons”; however, it does say that those weapons that are in “common use at the time” are protected. One would have to argue that semiautomatic rifles are not in common use depsite millions of them being in circulation in theUnited States alone.

A comprehensive Harvard study shows that the burden of proof that “more guns equal more deaths and fewer guns equal less death” has not been observed by evidence across a wide array of nations. This can also be seen in the United States over the past two decades, as more guns have gone into circulation while both the violent crime rate and homicide rate (including those committed with firearms) have declined dramatically.3.

Both the UKand Australia instituted strict gun control legislation which basically eliminated private gun ownership in 1997. However, neither countries’ legislation had an impact on lowering violent crime, and in both cases violent crime actually went up in the years following the enactment of the gun legislation.

Some gun control advocates, like Piers Morgan, would point towards the lower homicide rate of each country, but the fact of that matter is that both countries enjoyed the same lower homicide rates than theUnited Stateseven before enacting their gun legislation, making those claims disingenuous.

Moreover, despite the UKhaving its gun ban, the violent crime rate is still far above that of the United States, and the country has also earned the title of violent crime capital of Europe.

4. Myth: Assault weapons are firearms that our military uses in war.

The weapons’ menacing looks, coupled with the public’s confusion over fully automatic machine guns versus semi-automatic assault weapons — anything that looks like a machine gun is assumed to be a machine gun — can only increase the chance of public support for restrictions on these weapons.

“Similarly, the most common AWs prohibited by the 1994 federal ban accounted for between 1% and 6% of guns used in crime according to most of several national and local data sources examined for this and our prior study” and “the overwhelming weight of evidence from gun recovery and survey studies indicates that AWs are used in a small percentage of gun crimes overall.”

6. Myth: You don’t need an AR-15 because it has no legitimate purpose.

AR-15’s can serve many purposes. Its utility and modular design is one of the reasons why the platform is so popular. As this New York Times article points out as well, the AR-15 can be used for competition shooting, target shooting, hunting smaller game (varmint hunting), as well as self-defense. Just ask the Korean shopkeepers during theL.A. riots of 1992. 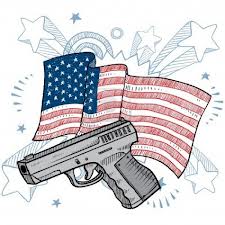 7. Myth: 40% of firearms are sold without background checks.

This myth came from this 1997 study of a small sample of 251 interviews. 60% percent of the respondents in the study purchased their firearms through a retail store or pawn shop, which must be FFLs or licensed firearms dealers that conduct background checks. The assumption is that the remaining 40% did not go through an FFL and background checks.

This number runs into problems though, as the study explains that 3% were obtained through the mail, 4% from a gun show or flea market, 17% from a family member, 12% from a friend or acquaintance, and 4% other. However, it does not explicitly say that these transactions did not go through an FFL or background check.

The study concedes, for example, that the 3% who obtained a firearm in the mail probably went through an FFL dealer. Retailers at gun shows and flea markets who are FFL’s are still required to run background checks as normal. Even firearms from family members, friends or acquaintances may still be required to go through an FFL depending on state law. One can see that the 40% number quickly falls apart.

Hopefully this will put to rest many of those talking points or myths that some have heard time and again regarding gun control. If not, then I suggest you do your own research.  But with all of this said, what is there left to talk about? Oh right… mental health and the actual causes of violent crime.